Note that due to concerns over the Coronavirus we have decided that cancelling the 2020 RMC Europe is the right thing to do. We did not make this decision lightly, but the health and well-being of our customers, colleagues and associates is our top priority. We look forward to hosting RMC Europe again in the fall of 2021.

REGISTRATION for 2019 Is Closed
registration is closed

mEMBER OF pARLIAMENT, FORMER CHANCELLOR OF THE eXCHEQUER 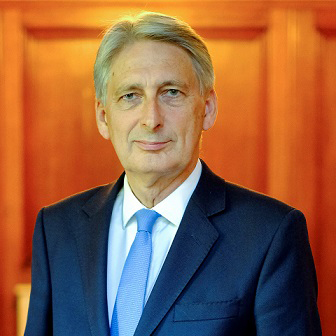 Philip Hammond has been a UK Cabinet Minister and key member of the British Government for almost a decade. Leading four departments over nine years and rising to the second most powerful job in government, he is one of only three people to serve continuously in the UK cabinet from 2010 to 2019,serving under Prime Ministers David Cameron and Theresa May.

Taking on the role of Chancellor of the Exchequer shortly after the 2016 Brexit Referendum, Philip took charge of the British economy at a time of unprecedented uncertainty.

He has always strongly held the view that nobody voted for Brexit with a view to becoming poorer or less secure, and thus believes the best way of delivering the result of the referendum is to negotiate a deal with the European Union that keeps the UK and EU close economically, even after the UK leaves the EU.

He fought strongly for this approach within the cabinet and has continued to do so since leaving government. He also focused on the needs of business, faced with such unprecedented uncertainty and particularly the need to protect London’s global financial markets. Philip has focused on the challenges faced by developed economies, specifically: the technological revolution and how it is already transforming the way we work and live our lives; climate change and how to harness the market economy to deliver decarbonisation; demographic shifts and the challenges of an ageing population, and particularly in the UK, the challenge of raising productivity.

Through his roles as Chancellor and as Foreign Secretary, Philip has considerable experience of working with China, and clear views about how to manage the integration of China as a major economic and strategic power into the global system. He also has strong connections in the Gulf region.

He was part of the “E3+3” team that negotiated the JCPOA nuclear arms control deal with Iran in 2015. During his tenure as Defence and then Foreign Secretary, Philip built strong links with the US and other allied counterparts, both civilian and military, and was a frequent visitor to Afghanistan during the campaign.

Philip retains a close interest in the strategic challenges facing the Western Alliance and then interrelationship between economic and strategic influences.

Philip grew up in Essex, England, and studied Philosophy,Politics and Economics at University College Oxford. Before entering Parliament in 1997, he ran a number of successful businesses. He remains the Member of Parliament for the Surrey constituency of Runnymede and Weybridge.

REGISTRATION is CLOSED
Please contact institutional@cboe.com
RMC is an educational event for qualified institutional users of equity derivatives (such as institutional money managers, pension fund managers and consultants, insurance company professionals, or other financial industry professionals). The conference is not intended or suitable for individual investors. Attendance is limited to qualified, approved registrants. Cboe may restrict registration, attendance and sponsors at its discretion.

Cboe does not hold an Australian financial services license or an Australian markets license.  The content of the materials available at Cboe RMC are for education and information purposes only.